Those of you who know me may know that I grew up riding the Milton Keynes redways frequently. There are some good bits and many bad bits. Some cycling advocates love them and some hate them: I'm probably going to disappoint both groups. The redways are neither heaven or hell. 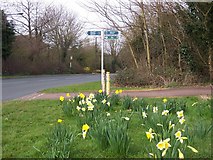 The redways are a frustrating example when you first meet them. They seem to be everywhere, providing space for cycling, yet it remains a minority activity. There are a few main problems:

Redways are definitely not a Dutch-style network. Many are no more than blue signs at each end of some small roads, especially the original network and especially in the pre-MK districts. The original network used a lot of city residential streets with many rather bad junctions where the bike-only cut- throughs join and leave streets: poor visibility, uneven surfaces, signs and yellow bollards that you need to avoid right when you should be looking at a junction (see the bollards in the photo above, complete with paint probably chipped off by crashes), and so on.

The redways were also neither unique, nor even a first: Stevenage had got it wrong in a similar way just a few years before.

What the redways are is attractive: I rode to MK rather than the almost- equidistant Northampton because of the perception (for my parents and probably a bit for me) that the redways into CMK were safer and more fun than the single-carriageway A-roads (later ex-A-roads) that I'd be riding into Northampton town centre. With hindsight, that perception was probably because of good marketing with maps and glossy leaflets, rather than the reality of things like casualty statistics.

It is a frequent misunderstanding to use MK as an example of the evils of providing a dual network, whereas a quick glance at the roads-first original plan tells you that the redways were very much a second-class network, with results that seem obvious now.

There wasn't "unconstrained space" and "extremely comprehensively" in MK. It was a finite area of north Buckinghamshire designated for London overspill, constrained east and west by county boundaries, north by the M1 and south by politics. This led to the original redways being botched by giving priority to all-user roads and even houses over cycling, leading to mistakes like squeezing the grade separation through underpasses on tight corners - with the anti-social behaviour and fear of crime that eventually led to underpasses elsewhere being filled in!

The original redways were woven in among grid, link and residential roads, giving way to all of them. I wish I was still near enough to the city archive to go read copies of the MK Development Corporation plans easily. Wikipedia points to http://web.archive.org/web/200609220636 ... e22403.pdf which is an MIT OpenCourseware lecture by Professor John de Monchaux, one of the original lead design consultants for Llewellyn Davies, that strongly suggests cars (masquerading as "freedom of choice") and buses were given much more thought in MK's design than bikes, although the talk contains other errors so might not be accurate on that either! https://en.wikipedia.org/wiki/History_o ... 000_people claims to show the list from "Draft Master Plan for Milton Keynes" which don't directly mention anything like the redways - and it's hard to see where they fit in the goals: maybe as making freedom to choose cars easier (as they don't have to share) or the city look attractive?

What happened to the original redways was similar to what would happen if you tried to build a road network formed of only C and U roads. When the inevitable equivalents of B roads were added in the form of the 1990s grid redways, they either reused the bad underpasses (sometimes with remedial work to open them up) or more often, they crossed grid and estate link roads on the level.

I don't remember any A-road-equivalent redways in MK before I left in 1994. I doubt such high quality non-motor provision will happen in England at the moment unless it's a river bank, former railway line or former road and even then the calls for compromises like narrowing, chicanes and gravel surfaces are pretty loud.

Please use the redways as an example of how bad things can get if you provide half a network and don't pay enough attention to the junctions, but not as an argument against all bike-only roads. You can cross almost the entire city on cycle paths but probably wouldn't unless you're either perverse or trying to prove a point.

I wouldn't be surprised if the early-90s retrofit of redways alongside every other grid road, allowing people to avoid most residential areas (at the expense of doing two sides of a square instead of a direct line through) cut the number of collisions in proportion to the reduction in the number of junctions you had to ride through to get anywhere.

One thing that I feel we could learn from MK is that the straighter fewer- junction grid redways are far better for transport than the meandering on/off /cross-street original redways. If we are going to build bike-only roads, we should imitate railways, building in wide track corridors with shallow gradients, smooth curves and as few level crossings as possible. Inside residential areas, 20mph and sharing streets is probably a better idea than the original redways. 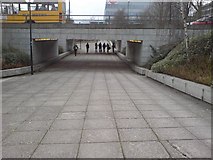 Another thing we should take from MK is that its original city centre shopping mall has a segregated network: there are shared-use paths and slow car park streets nearest the shops, below ordinary mixed roads (see photo), below a rooftop service/delivery vehicle loop that's accessed from Secklow Gate. There are the usual MK problems with path/car park street junctions/crossings having a path emerging from an underpass between bushes, unclear priorities and drivers failing to look properly, but I'd be surprised if cyclists meet HGVs often around that mall. Does anyone know whether accident stats for MK include a lower rate of cyclists Killed and Seriously Injured by HGVs than other cities? I didn't spot a summary on http://road-collisions.dft.gov.uk/lha /milton-keynes but checking the map one-by-one found only cars and cycles involved in 2012's serious-or-worse cycling casualties, and cycles, cars and one small lorry involved in 2011.

I'd be happy to help on a critique, but would the lessons be useful? I suspect that only greenfield sites are likely to have space for retrofit-redway-style bike roads without taking a motor vehicle lane away; and I don't think mall owners want the expense of building two road systems; so I doubt MK's best practice will be applied outside its boundaries - and it's doubtful if MK Council has the backbone, powers or funding to fix the areas cursed by the poor residential redways and apply the lessons there.

Whatever other problems the redways have, https://www.gov.uk/government/publicati ... nd-2011-12 puts MK Borough (including the area outside the city north of the M1) firmly in the highest cycling prevalence category. At 22% cycling monthly, 16% weekly, 9% 3x weekly, 6% 5x weekly, it's well above the England averages of 15%, 10%, 5% and 3%. But it's far lower than Cambridge - and I feel Cambridge would be a better (but still very imperfect) example for most English towns and cities.

If anyone wants to discuss this please contact me. Thanks.

"I'm not impressed by Franklin's report. For instance, it asks users to guess how much they use the roads as opposed to redways, and then proceeds to use exact numbers based on these guesses. The numbers make it look like science, but it is far from that, it doesn't even reach "back of envelope" standards.

I commuted & shopped daily by cycle for over ten years in Milton Keynes and had one very minor accident, with no injury to self. (I slipped on an icy descent into a redway underpass one mid-winter.)

Some of his suggestions about accident possibilities, to average adult cyclists, are laughable - "head on collisions", "children playing", "dogs", "branches" - they are about as likely to be a problem to cyclists on a redway as they are to pedestrians on a footpath. Of course you get the odd maniac & little kid who can't walk along a footpath safely...

Franklin also counts accidents at redway/road junction as redway accidents, when the damage is caused by the cars on the road! He seems to want to show that "redways are bad" and will use any sophistry to do so.

I agree with Franklin that junctions are the main problem areas... you really need keep all your wits about you (as a cyclist or pedestrian...) The problems could be fixed by more separation (hopefully, at greatest convenience to cyclists, not cars!) But the council has obviously become uncaring about about the redways, perhaps partly due to Franklin's report..."

-- Mal, commenting on a previous version of this page

If anyone wants to discuss this please contact me. Thanks.